Our daughter, Holly, was just 15 when she passed away on 21st June 2013 from a severe asthmatic reaction. She had suffered from asthma since she was quite young but it had always been quite mild and easily manageable. She’d never really had what you could call ‘an attack’ so it came as a great shock when our lives were turned completely upside down on that day.

She was a beautiful, bright and compassionate teenager with a love of music and a great sense of being there for other people – family, friends or indeed strangers. She always had a smile and a wave for people she knew, however remotely. It also became apparent after her passing that she was a great help to many people in ways that she had never spoken to us about.

Holly was a conscientious student and consistently did well in both her academic and other studies, gaining ‘A’s on the two GCSEs, Psychology and Religious Studies (ethics and philosophy), that she’d taken earlier in June. It makes us incredibly proud that she achieved this through her own hard work and determination.

Just two days after Holly passed away, she was due to start her work experience placement at Park Lane School in Macclesfield, a special needs school. She’d chosen Park Lane because they offer music therapy as part of their curriculum and it was something she was thinking of pursuing as a possible career. I can’t help but think that given her nature and musical talent she would have been perfectly suited to this line of work. 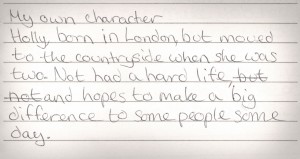 While sorting out some of Holly’s things we came across this little note that she’d written, as part of a philosophy project, expressing a wish to make a big difference to some people’s lives some day. She already had – to our lives and to the lives of her friends – and it is with this wish in mind that we have come to create Holly’s Footprint and a hope that Holly can inspire us to achieve the same goal.

At Holly’s service, a group of Holly’s close friends had written and read out their thoughts about the ‘sister’ they had lost. It concluded with “We couldn’t have wished for better friend… you may have had size 3 feet but you couldn’t have left a bigger, more beautiful footprint on our hearts forever”. It was a beautiful sentiment that touched us deeply and was an easy winner over all the names we considered for this project.